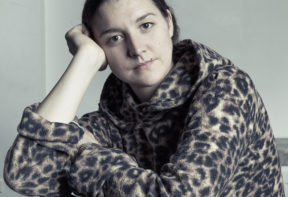 Eleanor Bauer is a performer and choreographer working at the intersections of dance, writing, and music. Her work is a profound synthesis of physical, conceptual, affective, emotional, formal, and aesthetic understandings. From talk shows to evening-length ensemble pieces, her versatile works range in scale, media, and genre, traversing different methods and categories of performance. Her solos ELEANOR! from 2005 and (BIG GIRLS DO BIG THINGS) from 2009 exemplify the humor, sincerity, and sensuality that mark her way of working, performing and being.

Originally from Santa Fe, New Mexico, Bauer is the daughter of a ceramicist and an architect. Her concept of creativity thus is bound to container-ness. With the empirical concreteness of a ceramicist with her hands in the mud, Bauer speaks about the body as a “dirty container: everything that passes through and over it leaves its trace. Dancing is turning that dirty container over and shaking it to see what comes out.” With the collaborative ethic of an architect who conceives of a program to unify all the interests and conditions of a project, Bauer sees choreography as “the design of containers for dance to live in, bound to time and place, context and culture, conditions and collaboration.”

Bauer has collaborated with musician and composer Chris Peck since 2003, creating several works together over the years, including the trilogy of A Dance For The Newest Age (the triangle piece), Tentative Assembly (the tent piece), Midday and Eternity (the time piece). With their political sci-fi experimental musical and dance concert Meyoucycle, Bauer and Peck pushed the depth and breadth of their collaboration, opening up a whole new terrain of co-authored entanglement between writing, dance, and music, which will continue even further in their forthcoming production, New Joy.

Bauer has worked as a performer with, among others, choreographers Xavier Le Roy (low pieces, Retrospective, and Le sacre du printemps 2018), Trisha Brown (Accumulation and Floor of the Forest at Documenta 12), Boris Charmatz / musée de la danse (levée des conflits, enfant, expo zero and 20 dancers for the 20th century), Anne Teresa De Keersmaeker / Rosas (The Song), David Zambrano (Soul Project), Mette Ingvartsen (why we love action), and Veli Lehtovaara (Thus, solo within Clandestine Sites: Displaced). She has collaborated as a choreographer and performer with visual artists Matthew Barney (River of Fundament, Drawing Restraint 24, and Redoubt), and Emily Roysdon (by any other name). She has performed with music groups The Knife (leading Miguel Gutierrez’s Deep Aerobics as a crowd-warmer for the Shaking The Habitual/Shaken Up tour), Ictus ensemble (as MC and vocalist in This is not a pop song and as co-creator and performer of Meyoucycle), and Arjan Miranda (Poltergeist music video).

Bauer studied at Idyllwild Arts Academy in California, holds a BFA in Dance from New York University’s Tisch School of the Arts, completed the Research Cycle at P.A.R.T.S. in Brussels, and is currently a PhD candidate in Choreography at Stockholm University of the Arts. She has been producing her pieces via GoodMove vzw in Brussels since 2007 and was artist in residence at Kaaitheater in Brussels from 2013-2016. She co-founded the open-source format for exchange of practices in the performing arts called Nobody’s Business in 2015 (www.nobodysbusiness.info) together with Ellen Söderhult and Alice Chauchat. She continues to teach, write, lecture, and organize contexts for exchange of knowledge in the arts, including her after talk format PROTO TALKS.

Currently, Bauer is working with Cullbergballeten and musician Jonatan Leandoer Håstad/Yung Lean on a new creation with 12 dancers, premiering at Sweden’s Way Out Westmusic festival on August 10 2018. Bauer premieres A lot of moving parts, a new solo with live music by WATT clarinet ensemble, September 20-21 2018 at Fondation Galleries Lafayette Anticipations in Paris within the Eschelle Humaine program of Festival d’Automne. Her latest collaboration with Chris Peck entitled New Joy will premiere at Schauspielhaus Bochum in Germany Ferbuary 23 – March 17 2019, and a commission with Nora Dance Group premieres in London in the fall of 2019.