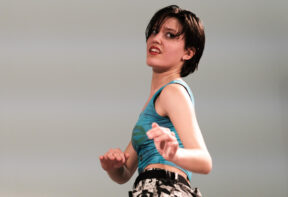 About the class:
In this class we will explore possibilities for collective risk taking. We will line out a common ground for departure from which we start to negotiate time, space and limits. Gazing is one of the tools we’ll use. We will also say no, look away and think together about power in the room we create. There will be authentic movement, but where the witness has the major role. Music will also be a vehicle.