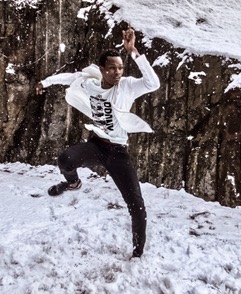 Shortly about Papis Faye
Papis Faye (Senegal) based in Belgium and Stockholm, for the moment studying in ”P.A.R.T.S” (Performing Arts and Research studios) Brussels, Belgium. Previously he is educated in Blaise Senghor and Ecole des Sables in Senegal, school of Maman germaine Acogny. When he was in Senegal he was a member of the Company ”Seneafrica” who are doing different kind of West African dance included Sabar dance and Afro contemporary. He has a big knowledge of his tradition dance called Sabar which he use to teach in different schools around Europe.