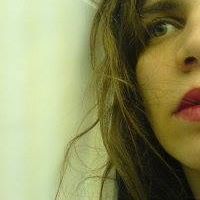 Sigal Zouk is a dancer/artist working in Berlin since 1997. She received her training at the Emek Izrael Dance School and joined the Bat-Sheva Ensemble from 1994-96. After moving to Berlin and working with artists such as Luc Dunberry and Juan Cruz Dias de Esanola, she became a member of  Sasha Waltz and Guests from 1999-2004. In 2005, she began her collaboration with Meg Stuart/Damaged Goods; first as a dancer and then as choreographic advisor/outside eye for the work of Stuart and Gehmacher as well as Stuart’s following works. In 2007, she began her long time collaboration with Laurent Chetouane in which she created 10 dance and theatre works for the stage.
She has worked with other artists such as Boris Charmantz (Musee de la Dans), AWST & Walter, Zeirkratzer, Simone Aughterlony, Ian Kaler et al.

During the past few years she has begun to develop her teaching practice where she guides professional dancers to locate their feeling body to a  presence that has the potential to navigate in and through any situation. She teaches in several European dance departments and institutions including Tanzfabrik Berlin, HZT ,ZZT Hochschule für Music und dance Köln, DDSKS Copenhagen ,DOCH Stokholm,Akademie for dance in Bukarest and Ponderosa.
Zouk accompanies artists and choreographers such as Jared Gradinger/Angela Schubot, Meg Stuart , Sheena McGrandles ,Antje Shupp,The progressiv wave ,Tamara Rettenmund and Mor Demer on their artistic journey, helping them to work with their limitations and their potentiality.
She was awarded the best performer in Dortmund Festival 2010 as well as dancer of the year from Tanz Magazine 2011.

The class combines physical body work with awareness development practice. various improvisational patterns designed to enhance and fine-tune the synchronization of physical, mental and emotional awareness and the sensitivity of the Person.
We are heightening our awareness of our own body and the space around it. We are learning how to use our mental and emotional present moment state as a starting point from which we can connect to our performance tasks. We are improving our ability to shift between different states .Through a series of guided improvisations we are training our ability to unite the mental, the physical and the emotional; being and doing; choreography and presence.
The work is process-based. Its benefits and outcomes can be applied to any kind of dance or performance form or style.