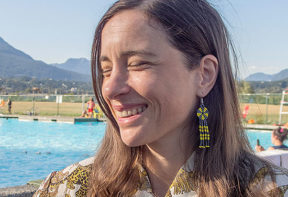 These days, Zoë Poluch wonders how and what a local practice can be, compelling her to decipher what ‘local’ and ‘practice’ really want. The practice at stake is choreography, the field in which she completed a masters degree in at DOCH, Stockholm in 2010.

Zoë has not developed one distinct choreographic interest or signature, but instead experiments with the different shapes of writing, dancing, organizing symposia, performing, collaborating, choreographing, reading and talking. Making performances has surfaced as the best excuse to bring together and forth a group that can actively approach and challenge “how to work”, questioning both the conditions to make work and how work encounters an audience.

Lately, this work is attracted to developing and challenging various modes of co-existence, most recently in the shape of a site-specific project located in a 9-story building in a Stockholm suburb. One activity that resiliently attracts her, at times mysteriously, is dancing. She looks forward to the far future, perhaps 2070, when she will inaugurate a dance company for powerful people over 70 years old and tour all the big stages of the world.

In the past, she studied, trained and worked in Canada and Belgium and could be found dancing and acting on big and small stages, kind of all over. Recently, this has included her own work, a solo called “Example”, performing with The Knife’s “Shaking the Habitual” concert/show, “On Air” with Nadja Hjorton, dancing in “Splendour” by Stina Nyberg and regurgitating history together with the choreographic project “Samlingen”.